December has been very productive in terms of the number of posts I wrote and there have been several glamorous dolls that would make perfect candidates for the annual Christmas Eve post, but I thought I would show you a different kind of Holiday Barbie today, one that I find underappreciated. She’s the Holiday Treats Barbie 1997 the brunette. When I look at her, I can smell gingerbread cookies that me and my two daughters bake every December in great amounts but that’s never enough and it always turns out that right before Christmas we have to bake some more. We put no restrains on ourselves, so the cookies come in various shapes like Christmas trees, ornaments, stars and … Easter bunnies and eggs because why not. The only thing that matters is for them to soften sufficiently before we can eat them on Christmas. 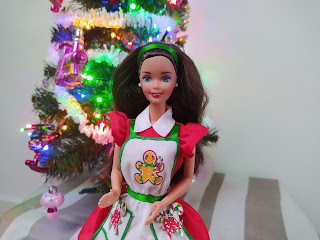 My Barbie may look pretty basic and ordinary for a Holiday doll but I had been hunting her for three years in a row now! For a doll that’s  neither rare nor popular, she was quite hard to get and I had no luck with her in previous years. I would start my Holiday Treats Barbie campaign in September to make sure she does arrive in December, but either there were no good deals or I was late for them. I was also tempted to abandon the brunette and get the equally dashing African American instead. The blonde is a true beauty too, she’s certainly more affordable than the other two variants and is often offered in company with another doll to make the auction more attractive. After all, what is better than a doll? You’re right! Two dolls! But in the end my patience was rewarded, I got my perfect brunette and she didn’t have to make the long yourney alone, because there was a bonus of the Tree Trimming Barbie as a part of the auction. Luck struck at long last! 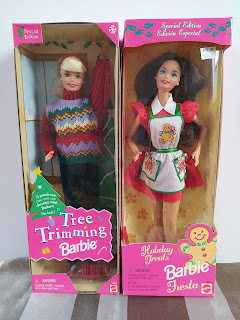 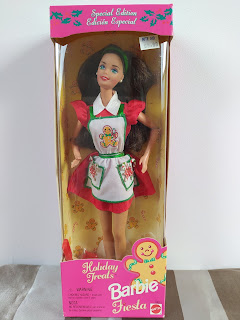 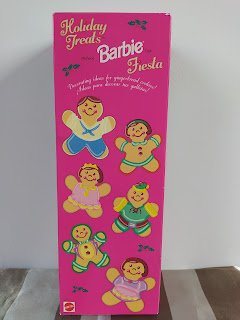 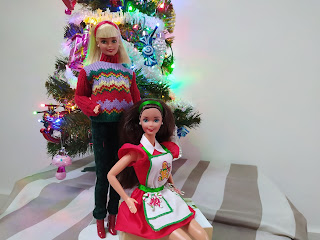 You can also find Holiday Treats the brunette under the name of Fiesta Barbie because she was produced also for the Mexican market. The doll only comes with a pair of red pumps and a hairbrush and she’s one of those low budget dolls that I wrote about when presenting Tree Trimming Barbie. It’s just one of those dolls that you could buy at a pharmacy for lack of a better gift for an affordable amount of money. To me, however, she signifies something more, the end of an era in Barbie history. There’s much of the good old days in her, like her bent arms, her lovely superstar face sculpt, amazing quality saran hair and the face paint typical of the middle 90s. Her eyes are large, her lips are full but the strokes are not so thin and sharp like the ones you see in younger by one year Tree Trimming Barbie. She’s just a very pretty doll. 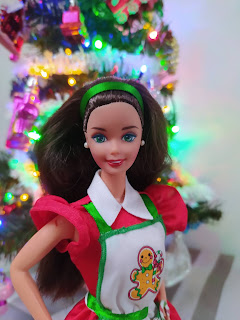 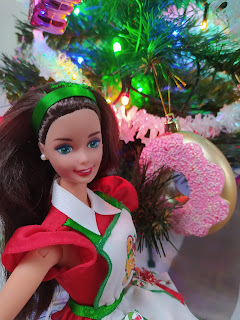 Barbie’s outfit is very graceful and it makes her look sweet and lovely but that’s where Mattel decided to cut the corners and exercise what would become a new standard in the upcoming years – the infamous one-piece. That’s right! The outfit looks like it’s a dress and an apron but these two pieces are in fact sown together. I don’t like that, but at least it’s made of lurex that I find the most barbieish fabric in existence. The apron is good cotton too. I just wish these two pieces were separate as it would add to the general playability of the doll. As I am an adult collector though, this is not so much of a problem to me. Barbie must be color coordinated no matter what, so she’s wearing a green headband, a pair of red simple pumps and a simple set of jewelry finishes the look. 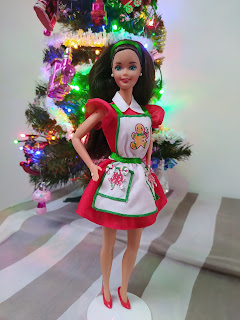 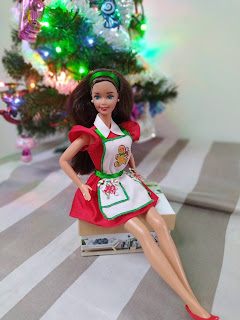 This doll may not be fireworks and she may not throw you to your knees but I like her a lot and I think she’s one of the prettiest brunettes of the 90s. Holiday Treats makes me think of the warmth of a family home and the dolls me and my sisters would find under the Christmas Tree. Our parents were generous with gifts, toys and sweets especially and although I was significantly older than my sisters, they wouldn’t make a big deal out of me wanting a doll as a Christmas gift. I suppose they didn’t want me to grow up too soon, but then what parent does? Me and my sisters would play with dolls together all Christmas and have a lot of laugh and back then, I would be very happy if I found Holiday Treats Barbie wrapped for me. She would have been one of my favorites. 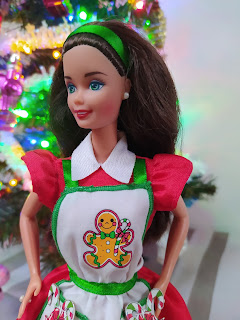 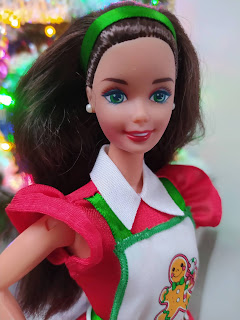 Since we’re at the topic of Christmas gifts, Skipper has been a good girl all year and she was rewarded with the Dream Camper. When I was out shopping for some Christmas ornaments, I found this adorable Hot Wheels Barbie Camper that I just couldn’t resist and my only regret was that there was only one available. My little girls like it just as much as I do and they play with it a lot. The little vehicle is the perfect replica of a real, full-size 3in1 Barbie Dream Camper GHL93 released this year or the year before, I’m not sure. You can even open a side flap to reveal the tiny pool! 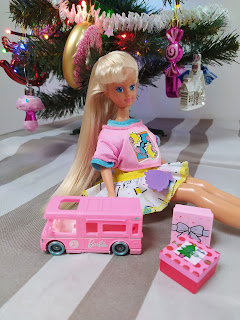 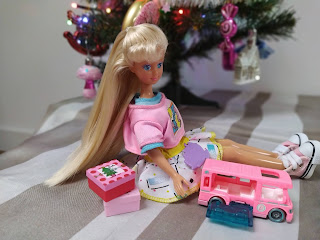 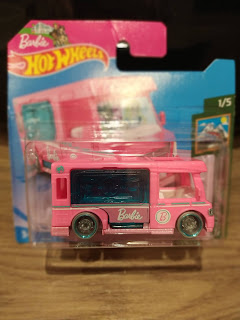 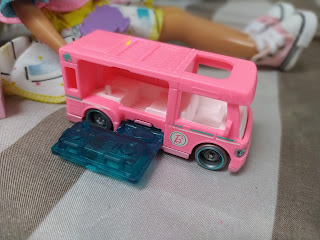 I would like to wish you a perfect Christmas filled with joy and laughter and perhaps a few dolls. May your home be filled with the sound of Christmas carols and the scent of gingerbread cookies and above all, the love of your dear ones and the hope that the new year will bring better and healthier time. Merry Christmas. 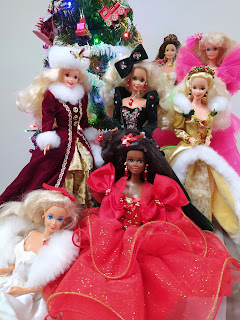 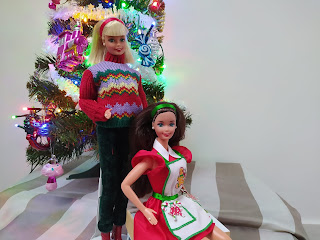 Posted by coffeeanddollspl at 12:00 AM